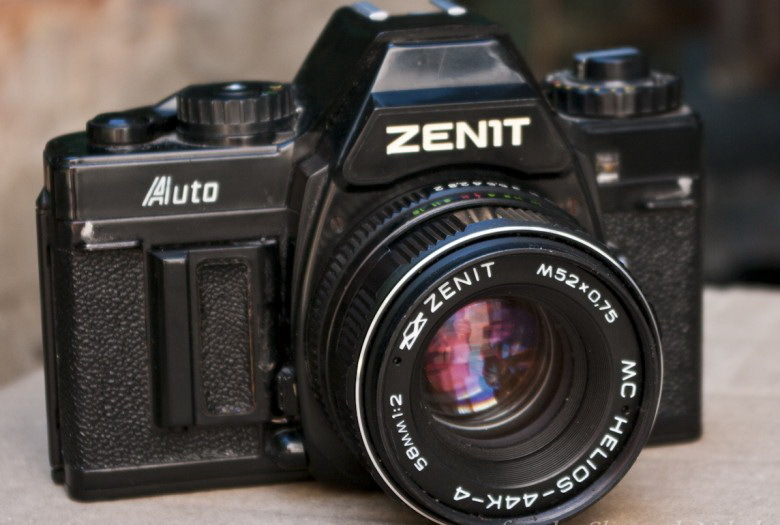 Zenit Automatic (automat) The first automatic SLR camera KMZ with a focal curtain shutter controlled by an electronic unit. For the first time, residents of Krasnogorsk also used the K-optics bayonet mount, which we know from Pentax cameras (K-2, KM, K1000, etc.). A great rarity and collectible interest are the Zenith-Automatic machine with French electronics, outwardly it does not differ from the Soviet model. Delivered exclusively to France in exchange for their own electronics. All zeniths "Automatic", "AUTO", "Automat" for ten! years (1984−94), relatively few were produced, 68,002 pieces.


Compact !! SLR camera fits easily in your hands. All controls are verified and for the most part are not satisfactory.


The trigger has a comfortable shape, the thumb cocks the mechanism without tension. Moreover, the trigger has a starting position. The index finger can always be on the smooth and soft release button. The shutter button is synchronized with TTL metering. The only thing that causes discomfort is the diaphragm tutor, it has an oval shape and is far enough away, in addition, it is slippery. The ring finger reaches for him. The left hand contains all the lens controls, as well as the exposure compensation ring.

The process of photography was limited mainly to setting the aperture, focusing and pressing the shutter button. The camera is operating in aperture priority mode!

The frame of the camera is metal, but all the panels are plastic. Plastic is not expensive and fragile. The casing around the bayonet is also plastic, the gaps between the metal of the bayonet ring and the casing vary from 0.2 to 1 mm. The battery cover is placed on the front of the Zenith, similar to the placement of batteries can be seen on the automatic Canon A-1. The lid open button is located on the bottom of the lid itself. The camera needs four batteries for normal operation, I use the LR44. Since they are smaller in diameter than the original RC-53 batteries and fall out of the holder, you need to use a glass for a set of batteries. For example, from Kiev-19M. You can go in an easier way, just wrap with tape. The most convenient solution is a single 6 volt PX-28 battery.


The focal-plane Curtain Shutter of the camera is capable of operating shutter speeds from 1000 to 1 sec, including the shutter speed from hand "B". Exposure speeds are selected automatically by electronics, depending on the set aperture values, ISO film sensitivity and the illumination of the subject.


The shutter speeds can have an arbitrary value that is not customary for the standard set of mechanical closures 1000−500−250, etc. In this case, the camera selects the most accurate shutter opening value, it can be 900 and 750 and 300. The camera does not work without batteries!

So that we can confidently shoot handheld, the camera has LED indication. But in order for it to work, you need to cock the trigger, otherwise the lower LED will light up. It consists of two bulbs positioned vertically on top of each other on the far right of the viewfinder. The peculiarity is that the paired blinking of the LEDs, allowing us to take pictures, can signal in the range of shutter speeds from 1000 to 60.


The 60 exposure limit is due to the difficulty of handheld shooting at faster shutter speeds. And it is recommended to mount the camera on a tripod.

If the upper LED is on, the illumination is excessive. The maximum short shutter speed of 1000 is not enough and it is necessary to close the aperture until the LEDs start blinking in pairs. When the lower LED is on, it means that the shutter speed that the shutter will operate is shorter than 60 and it is necessary to open the aperture or set Zenit-Automat on a tripod.

The problem is that the range of shutter speeds recommended by paired blinking of LEDs is too wide. For example, you need to shoot a fast moving object, the LED indication says that you can safely press the shutter button. The camera can choose a shutter speed shorter than 250, or even 125. As a result, we will most likely get a blurry frame. In order to find out what approximately the shutter speed the camera will work, there are recommendations and a technique that will help you choose the aperture effectively enough. But in general, the efficiency is not high.

The Zenit-Avtomat viewfinder displays 95% of the frame; problems with framing should not arise as well as with focusing. The focusing screen has Doden wedges (1.), Microraster (2.) and a matte field (3.).


Comparing the viewfinder of Zenit Avtomat with Zenit-19, you can observe a general similarity, microraster, Doden wedges and a matte field are both for both, the frame is covered in the same way. While the younger brothers cannot boast of such a large frame coverage, limited to 67%:

Hence, there is a large error in the TTL metering. In order to increase the accuracy, eyecups are used, they are tightly adjacent to the human eye. Less commonly, an eyepiece shutter is used. The latter solution is relevant for automatic cameras, for example Zenit-18.

The photo above shows how easy it is to use the damper with a lever.

Optics mount "K" - Pentax. But not quite, there are reservations and nuances. The design had to be slightly changed so as not to repeat the design by 100% and there were no problems with the patent. Although the patent for the USSR itself was not valid. The change mainly affected the adapter for threaded optics m42. And Pentax optics can be used without any problems. The introduction of the "K" mount made it possible to automate the process.

First of all, this is metering the exposure at an open aperture, the camera previously knew the position of the set aperture value and subsequently automatically covered it to the specified position. Secondly, it became possible to quickly change the lens. Thanks to the saved flange distance, it was still possible to install lenses with an M42 mount through the appropriate adapter. And what is important is to securely fix the lens in the frame. What is the castle for?

The diaphragm tutor was mentioned above, its lever is slippery and not comfortable. Has a tight move, there is no desire to use it again.

Zenit-Avtomat is a good camera for everyday amateur photography. It is rightfully considered the most successful KMZ camera. The compact body houses a reliable shutter and sophisticated electronics, an excellent viewfinder and bayonet mount optics. The applied "K" bayonet retained the ability to use the M42 threaded optics through an adapter without losing infinity, but with the loss of a jump rope. In comparison with purely mechanical cameras, Zenit-Avtomat has lost its notorious reliability and unpretentiousness.