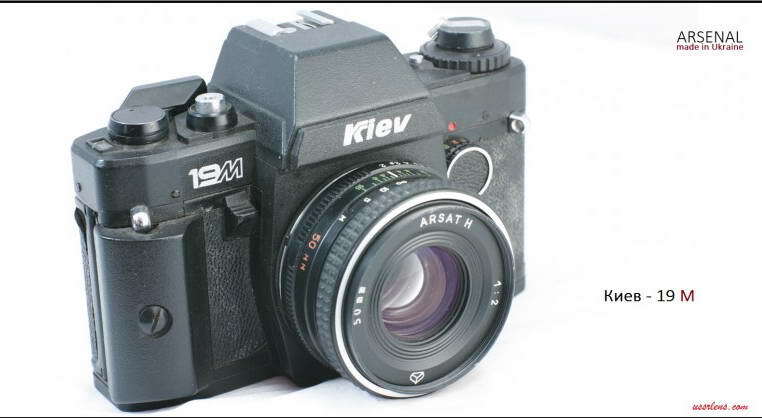 Kiev-19M was produced at the Arsenal defense enterprise (Kiev - Ukraine) in small batches until 2000 (to be confirmed), the letter "M" in the name indicates that the device has been modernized. I think it is not correct to consider the Kiev-19M as a simplified model of the Kiev-20, since the mechanical components differ significantly in favor of the K-20.

Kiev-19M fully repeats all controls of the previous Kiev-19, but in the hands it is much better. Thanks to the removable pad under the right hand, it has become much easier to hold the camera, if it gets in the way, you can unscrew it with a coin.


The camera has at first glance a strange arrangement of the shutter speed wheel, on the front of the camera, under the left hand. In the course of operation, this approach of the designers no longer seems unsuccessful and quite justified. You get used to it quickly and there are no special inconveniences. Also in the left hand are the lens controls, namely the focusing ring and the aperture setting ring. The right hand is responsible for the release button (index finger), cocking of the mechanism (thumb) and aperture jump (index finger).


In the course of modernization and the reduction in the cost of housing parts, it was decided to use plastic panels, as a result of which the camera is inferior in reliability to its older brother Kiev-19. The unpretentiousness of the camera also killed the mediocre attitude of the defense company to the camera, first of all, this is visible in the fit of the plastic parts. This is not to say that it is absolutely bad, but the language will not turn well to say ... Below average.

TTL froze - that's why I got the task of writing a re-review of two almost identical cameras. The fact is that in the Kiev-19M, exposure is measured at an open aperture. Compared to Kiev-19, the modified version does not need to clamp the aperture jumper. On the “M” version, you need to set the desired aperture value and slightly press the shutter release button, in the viewfinder's field of view you will see an LED designation, depending on the illumination there will be a plus or a minus. In this case, the diaphragm is not clamped to the set value. Since the camera already knows what value you have set, this happens through the mechanical interaction of the lens and the camera body. At the moment of fully pressing the shutter, the camera will automatically close the aperture to the set value.

It is also worth knowing an important feature of the mechanics of a lens with a carcass, the point is that for the TTL system to work properly, lenses with niches in the body are needed. On the camera, or more precisely on the bayonet of the device, there is a lever, it is responsible for recognizing the set aperture value. When the lens is installed, this lever is displaced by as much as the cut in the lens is made, and also when the aperture is changed, it changes its position. During operation, it was noticed that the usual Helios-81M (from Kiev-17) does not have the necessary niches, as a result of which the camera thinks that the lens hole is 1.2 and when the TTL aperture value is changed, the metering will show inaccurate metering readings. The photo below shows everything in comparison:

(as can be seen in the photo, there is a diaphragm recognition lever on the k19m, on the k-19 it is absent for obvious reasons)

(on MC Helios-81N there is a recess for the lens aperture setting lever, on Helios-81M it is absent although both lenses are for "H" mount, below is a lens without a recess)

The battery pack was implemented a little differently and for a different type of battery, although on the other hand, nothing prevents us from typing 3-4 LR44, AG13 and similar batteries into a single unit. Do not forget about the polarity:

The tripod mount in the updated model has been moved to the left edge. At a time when the predecessor had a more acceptable location, almost near the center.

It is difficult to explain such a downgrade, most likely they did not betray much importance. On Kiev-20 with the same battery pack, the tripod mount is closer to the center. Why was this not repeated on the K-19M the question, at least moved to the other side, under the release button.

The viewfinder has retained its basic parameters, in addition to the micro-raster, diagonal Doden wedges were added (in some, horizontal), it is worth noting that the Kiev-19M models are also found without a micro-raster. Diagonal wedges make it possible to target both horizontal and vertical lines. There will be no such drawbacks with a horizontal wedge such as focusing the lens on an object in a horizontal position. It should be noted that such a feature with the Diagonal wedge is more of a marketing step (here both vertical and horizontal), it is inferior in terms of the convenience of focusing on a vertical object to the usual horizontal wedge, since the displacement of the wedge itself is less noticeable in relation to the classic one.

Diagonal wedges are a rarity in themselves; few people have used this solution. Praktica MTL5B has a similar wedge (cameras are similar in many ways).

The Kiev-19M camera can be bought even today in an unopened box (not cheap) or in very good condition for very modest money, 19M has not bad makings of an amateur camera. For Nikon gadflies, metering at an open aperture will be important. Many will say that you need to look for a top-end camera Kiev-20, since it is more perfect, the shutter has 1000 and 1 sec., The mirror mechanism is completely different (softer in operation). But finding twenty in working order, with live TTL metering and without pitfalls every day is more and more difficult.