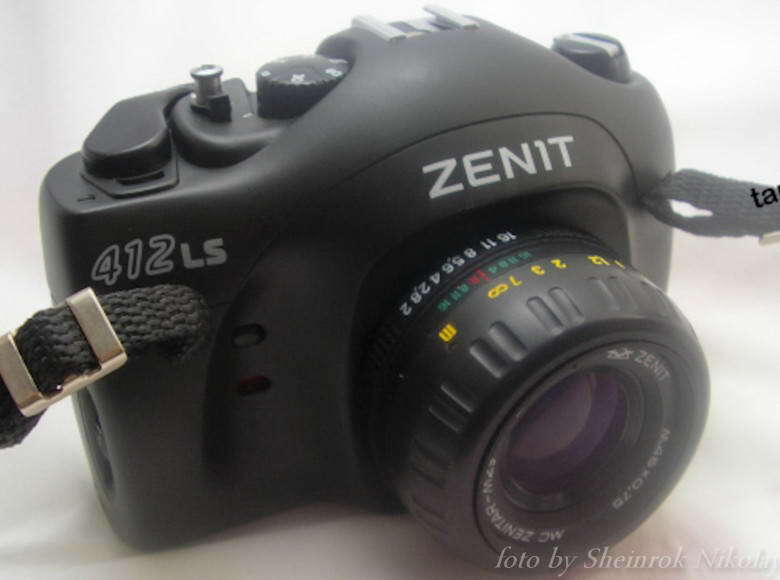 The final stage of modernization of Zenit 12sD. To be more precise, the hierarchy looks like this: Zenit 12sD-122-212 - 312 and 412DX-LS. Further, the project did not receive development, over time the Krasnogorsk Zeniths greatly lost their positions in the market of the CIS countries, and those that were sold were returned for repair or exchange. This line of cameras became morally outdated in the 80s of the last century, perhaps forcing the shutter would slightly improve matters, but already in the 90s there was no time for that.

The camera lies comfortably in the hands, the plastic is pleasant to the touch and is not slippery, the camera does not strive to jump out of the hands like its predecessors 12cD and 122. The characteristic protrusions on the front and rear panels help to comfortably grip the camera (again compared to the predecessors 12cD and 122) Also, the Zenith has noticeably lost weight, with prolonged exposure metering, the hands do not get tired so quickly. The rest of the layout of the controls remained classic without pronounced flaws. The index finger of the right hand rests on the shutter button, and, if necessary, can reach the shutter speed setting without taking your eyes off the viewfinder. This arrangement allows in emergency situations to change the shutter speed by 1-2 stops, not very convenient but quite effective. The left hand contains the control unit for the aperture and focusing of the lens. The complete lens takes some getting used to, given its tapered design.

Zenith 412LS has a number of features combined in the smooth lines of the camera. First of all, this is a plastic case - the abundant use of thin plastic negatively affected the reliability of which Zenits were famous, if dropped from a height of a meter or more, the case will receive serious damage (cracks, chips). A cover will help to avoid serious consequences, it is quite simple and completely uncomfortable. It is made in such a way that the strap attached to the camera is outside.

Thanks to its design, the camera stands apart, since other manufacturers do not have a similar one, which is a painfully bold idea. With such a refinement, KMZ decided to extend the life of the x12 series. A serious person, and even more so a professional, will not dare to buy such a zenith, this is not serious (not taking into account the tx), but a novice photographer will be quite interested. A kind of unique ugly duckling.


The complete MS Zenitar-M2s lens is ahead of the MS Helios 44m-7 in a number of technical characteristics.


It has a higher resolution (according to TU 63/32 versus 50/30 for G44m-7) and a viewing angle (45 lines per mm versus 40 for Helios-44m-7). MC enlightenment has also undergone changes, a higher-quality chemical "film" of green color. However, the plastic parts and housing raise doubts about the reliability and life of this lens. If you do not find fault with much, then the capabilities of the lens will be enough for complex shooting, these are landscapes and macro photography (paired with macro rings), portraits and still lifes. Zenitar 2/50 is quite suitable for a non-spoiled or novice photographer. The lenses are mounted by screwing them onto the M42 thread, which is rather inconvenient, there is a pronounced disadvantage on 200mm lenses and more. On the other hand, an incredibly many lenses (USSR, Germany, Japan, etc.) of different focal lengths, as well as different price ranges, were released for the M42 optics mount, but within reasonable limits. Based on what a beginner buys with a budget of up to $ 100 per lens.

The horizontal wedge viewfinder displays 67% of the frame. Initially, it seemed more than on Zenit-122, but this is due to different standard lenses with different angles, in fact, it is the same.

LED indication is located in the field of vision to the right and vertically. When photographing, especially of architectural values, one should not forget about 33% of the image from the frame lost in the viewfinder. Such a deficiency can be misleading. As a rule, a beginner photographer forgets or does not know about this feature at all. As a result, unwanted objects appear at the edges of the resulting photograph. In order to correctly take the frame, you need to mentally expand the image in the viewfinder by 8-10%, in each direction. Doden wedges help to focus on the object as accurately as possible, they are very useful on high-aperture lenses up to 200mm. But on ZOOMs, long-focus and dark wide-angle lenses, focusing is much more complicated. In the viewfinder, there is a dark spot in the place of the wedges to help focus. For some, the usefulness of wedges will seem questionable and become an obstacle. On the other hand, it should be noted that SLR cameras from other manufacturers with a wedge have the same feature.

TTL measured unchanged, with LED indication from three LEDs located on the right, top red - a lot of light, middle green - press the trigger, bottom red - little light. More or less intelligible according to the indications. On previous models, without dependence on the DX film format (with manual setting of the film sensitivity), the readings were more accurate.

DX is the most interesting ... automatic setting of the film sensitivity, that is, after a simple installation of the film (DX), TTL metering starts to work, without film or when installing a non-DX format film, it will not work for objective light metering. More precisely, it will show a minus (lower LED). I will mention that almost all the film on the shelves is already DX standard.

The shutter ... works out 500-250-125-60-30X- "B" ... no changes, a terrible set, with a large step between exposures, moreover, as it turned out, the shutter works out slightly different exposures, something like this: 600-280 (300) -125 -50-30 (25). The result differs from instance to instance. And it is not critical (this is the norm of the curtain shutter), especially since the wide Dynamic Range (popularly DD) of the film smooths out most of it. For an inexperienced photographer, a beginner, this set of shutter speeds can be considered a positive side of the camera, they are more than enough for learning and learning the basics.

The tripod mount is centrally located, but the plastic housing limits the ability to mount long telephoto heavy lenses. The fact is that long-focus, weighty (the same Jupiter-21, granite-11) lenses outweigh the weight of the camera and the whole structure on a tripod strives to bite its nose into the ground. As a rule, lenses with 300 mm or more have their own tripod mount and the problem with overbalance is not so noticeable.

The latter in the Zenith 412LS line will be of interest to the amateur photographer as a training simulator. The main disadvantages of the camera are an archaic shutter, a viewfinder with a small frame coverage and a plastic body. Despite the shortcomings of the camera, it impresses with its design and complete lens. It is not often found in the secondary market and the price is from $ 30 to $ 50 per copy in good condition. Whenever possible, choosing from other Zeniths from the x12 line, 12sD and 122 look preferable.