Overview of the Kiev-4AM Rangefinder Camera 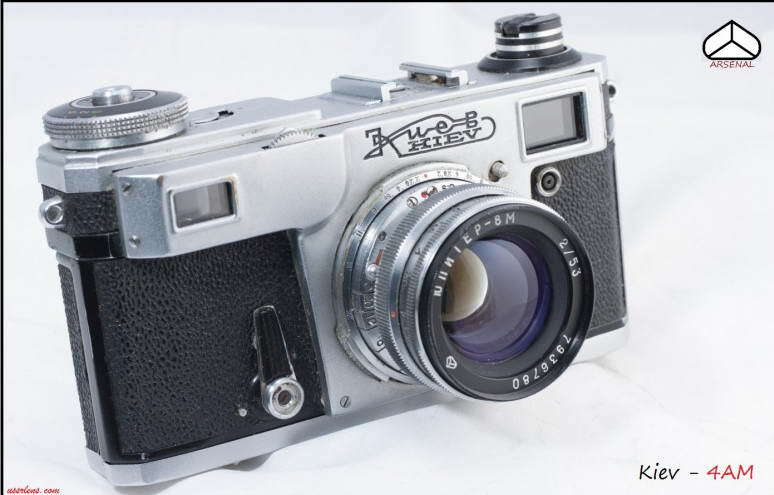 The latest version of the Kiev rangefinder camera without an exposure meter was produced at the Arsenal from 1980 to 1985 inclusive. Kiev-4am has replaced essentially the same Kiev-4a, the changes are not significant. The letter "M" itself added to the name Kiev-4aM indicates an "upgraded" version of the camera.

Kiev-4AM is based on the development of the 30s, Contax-2. In the early 50s, the production facilities of the Carl Zeiss (Jena) plant and the documentation itself were transported as reparations to the USSR and, in particular, to the Ukrainian capital Kiev (as the country most affected by the Second World War). The first rangefinder cameras in Kiev were assembled from Contax components.

The difference between Kiev-4A and Kiev-4AM lies in the updated shutter speed head, the rewind wheel was replaced with a tape measure, a synchronization contact was added on the flash mount, the film rewind button is hidden. In this version, the installation of two spools, one with a film and the other empty receiving, is not possible.

Compared to SLR cameras, rangefinder Kiev has a significant plus, its dimensions and weight are much less. With a wide-angle lens, the camera doesn't take up much space in a small purse.

In addition, the very principle of focusing with a rangefinder takes much longer than that of SLR cameras. Since the rangefinder spot does not cover even half of the viewfinder, the image in the viewfinder is slightly displaced relative to what the lens sees - this feature is called parallax and should be taken into account when framing.

Another important point, the rangefinder itself provides more or less accurate focusing at a small segment of focal lengths, for Soviet cameras this gap is mainly from 35 to 135 mm. Ideally, the rangefinder should be adjusted for each focus separately. The use of wide-angle lenses (less than 35 mm) has less effect on accuracy, the shorter the focal length of the lens, the wider the depth of field and the more likely it is to hit the target even on the distance scale on the lens. myself (offhand). And the inversely proportional situation with telephoto lenses (more than 135 mm), the shallow depth of field combined with the rangefinder error will not allow accurate focusing. For this reason, telephoto rangefinder lenses are limited to two or three lenses with focal lengths of 80 and 135 mm.

The Contax-RF mount has a specific dual mount and serves as a helicoid for lenses. For example, the standard lens of Helios-103 or Jupiter-8M is devoid of this unit. A modest fleet of optics was produced in the USSR for the Contax RF mount, the most common are Jupiter-12, Jupiter-8, Helios-103, Jupiter-3, Jupiter-9, Jupiter-11.