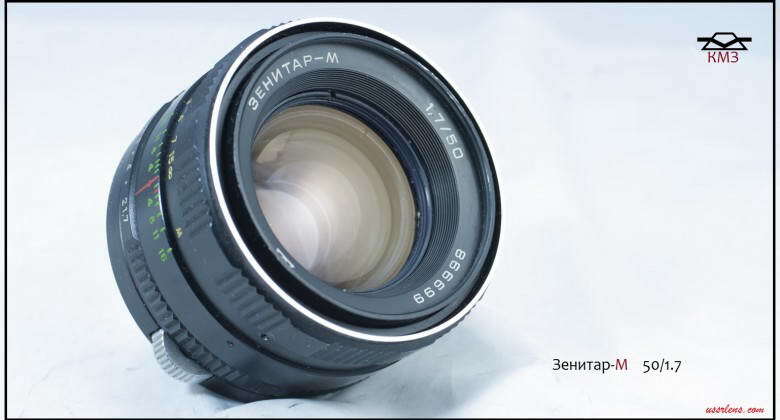 Zenitar-M 50 / 1.7 stands apart from other standard lenses for Zenit. In fact, all Zenitars were supposed to replace lenses with the Helios trademark.A new branch in development, a different optical design, a higher grade of glass. Developed in the late 70s, it appeared on the assembly line already in 1980. It was sold separately and came as a standard lens for the Zenit-19 camera, rarely paired with the Zenit-12sD. Such a qualitative leap in the optical structure of KMZ is caused by a clear lag behind the world's leading photo manufacturers, Zenitar has come close to the Japanese counterparts of the 70s.

The optical design of Zenitar-M 50 / 1.7 repeats the design of the Ultron from the German optician Albrecht Tronnier.

The barrel of the lens repeats the body of Helios-44 M - a combination of metal and glass. The fit is excellent. The only obscure thing is that all the screws and stoppers are not pressed to the stop. Because of this, over time and intensive use, the focusing ring may play. Some specimens wash due to the fact that one lens is loosely twisted with a retaining ring - accompanied by a specific sound of glass rattling. Not to be confused with the slight clatter of the diaphragm mechanics.

Focusing is smooth and tight. From the minimum focusing distance of 0.45m to infinity, you need to rotate 265 degrees, it takes about three interceptions. In combination with a tight move, there is no need to talk about operational refocusing.

The stroke of the diaphragm setting ring is stepped with clear clicks. The aperture step is indicated by the corresponding value.


The diaphragm has 6 blades, matte but not blackened. Re-reflections from the diaphragm are not frequent, but they do occur. The push-down bouncing diaphragm almost exactly fulfills the set values. Over time, the diaphragm return springs weaken and need to be replaced. Or, as a temporary measure, the spring is thrown over a couple of turns for greater elasticity.

Just like the Helios-44M, the zenitar has a diaphragm repeater. When used on digital SLR cameras, it becomes possible to aim at open in tutor mode "A". At the right moment when photographing, the repeater is instantly switched with fingers to the “M” mode and the diaphragm closes to the preset value.

How does it work on digital cameras?

We set the required aperture value in advance, for example, we need not a lot, not a little, but just 5.6.

We set the position of the repeater "A" - the diaphragm will open.

We focus on the open.

At the moment of photographing, we transfer the repeater to the M mode. - the diaphragm will close to the preset value 5.6.

There is one more small plus - there is no need to block the leash in the clamped position of the diaphragm in order for the diaphragm to work on digital.

It is generally accepted that the antireflection coating on glasses is single-layer.

Threaded connection М42 allows you to install Zenitar-M 1,7 / 50 while maintaining infinity through an adapter for SLR cameras Pentax, Sony, Canon, Olympus. Alas, it is impossible to mount Zenitar-m 1.7 50 on Nikon-F using a lensless adapter while maintaining focus at infinity. For normal operation, the lens can be altered and adjusted to fit the Nikon flange.

Zenitar-M with an open one is very sharp, only at the edges of the detail is reduced. When closed already with F 2.8, excellent sharpness in the center and around the edges is already good.

Contrast and sharp at the same time with the open. On covered, between 2.8 and 4.0 cuts across the entire field. Contrast drops when there is a bright light source in the frame. In the case when light rays enter the lens at an acute angle, the contrast drops insignificantly. But if the subject of the shooting requires a bright light source to be present in the frame, the sun behind the model's back, then the contrast drops noticeably in the open one. It is worth noting that starting from aperture of 2.8, the contrast increases to acceptable. This is given the difficult task of using direct backlighting in the frame. In such cases, using a lens hood can be more than helpful.

For portraits of the lens sharpness with excess, all flaws and imperfections of the skin come out

On the open, I had to turn down the sharpness.

At 4.0, the sunrise behind the back, pulled the contrast and colors.

I would like to emphasize the bokeh that the lens draws. It is similar to modern lenses without twisting the blur area. Subjectively, it washes the background in the open, not "in the trash" like MC Helios-77m-4, it is quite possible to understand what is there. And without twisting by itself.

On closed diaphragms in the background instead of circles, "Nuts" come out - the lack of petals affects.

There is a place to be, where without them on high-aperture lenses.

On the branch in the upper left corner ...

It is possible to hide them during post processing. But in rare cases, chromatism is too obvious and stands out, it is difficult to hide.

Weak enlightenment affects, although hares were specially caught in this experiment. In a normal situation, with a hood (I repeat) it is difficult to catch a hare.

As a result, we have the following advantages:

Zenitar-M is a plastic high-aperture lens with characteristics not worse than those of the Japanese Takumar, but alas without multilayer enlightenment. 1. The domestic competitor is a rarer MC Helios-77m-4, but it has a different price tag. Choosing from two I preferred the Zenith for its predictability, sharpness and the complete Zenit-19 camera.